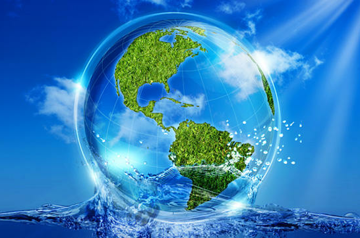 We Californians know a thing or two about water scarcity after our recent drought. But we’ve managed to survive thanks to relatively minor lifestyle adjustments like taking shorter showers and replacing lush lawns with equally attractive desert landscapes. It’s not so simple for many people around the world.

I came across an interesting document put together by the Zurich Insurance Co. detailing the problem of water scarcity from a global perspective. They estimate that 71% of the earth’s population, some 4.3 billion people, suffer moderate to severe water scarcity for at least one month a year. Water shortages hold the potential to trigger a host of socio-political disruptions around the world, including health problems, rising food prices, armed conflicts, political corruption and violence, or even government failures and revolutions.

The World Health Organization says that about a quarter of the world’s population – more than 1.5 billion people — lacks safe drinking water. Millions of people die each year from water-borne diseases that have been virtually eradicated in the United States and other developed countries. Most of the victims are children under five.

Think of what life must be like in many parts of the world where people must walk miles each day to communal wells, streams or rivers to collect jugs of often polluted water for daily household drinking, cooking and cleaning. Often this grinding task falls to young children. Imagine yourself as, say, an 8-year-old getting up at the crack of dawn, then trekking 5 miles or more, hauling several gallons of water on the return trip. All before attending school, which might require another walk of several miles. If that was my unfortunate lot in life, I don’t think I’d be able to stay awake long enough to learn reading, writing and arithmetic.

Stories like these make me appreciate the good life we live in these United States. Even in parts of the country like ours where water supplies are at periodic risk, we know how to take steps to conserve.

It also makes me proud to earn my living in an industry that is at the forefront of water conservation and stewardship of this most precious natural resource.