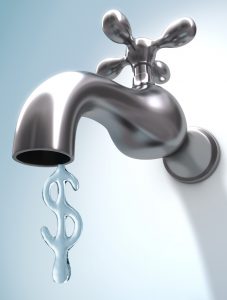 I don’t need to tell you that water prices are on the rise. Nationwide, water rates have increased 41% since 2010. Many locales here in California have been hit even harder. This trend has been occurring almost everywhere in recent years due to scarce supplies, burgeoning populations and ever more stringent environmental concerns.

Here in California, rising water rates also stem from a paradox. During our recent four-year drought, many of us did what we were asked to do as good citizens by reducing water usage significantly – by an average of 22% statewide, according to the New York Times. Good for us, but for water utilities that has meant less water to sell to customers and thus less revenue to support the expensive infrastructure needed to bring fresh water into our homes and dispose of wastewater. So they have had to raise the price of their product to make up the shortfall. Since there is no good substitute for water for most household uses, and since most water utilities are regulated monopolies without lower-cost alternatives, we have no choice but to pay higher rates.

Another paradox: the solution isn’t to use more water. Even if we dumped our conservation ethic and switched to a water-hog lifestyle, that would increase pressure on California’s water supplies, leading to shortages that would also raise water rates. Damned if you do, damned if you don’t!

Researchers at Michigan State University recently conducted a study finding that about 12% of U.S. households currently can’t afford water. If the cost of water continues to rise as projected, more than a third of U.S. households – 36% — won’t be able to afford water in the next five years. Some of that is due to aging infrastructure, especially underground pipes that sometimes spring nasty leaks. Remember the burst pipe near UCLA in 2014 that threatened to turn Pauley Pavilion into a water polo facility?

The EPA contends that the average home should only spend 4.5% of household income on water and wastewater services. Take a moment to check out your water bill and see if you fall within that parameter.

If not, what can you do about it, besides cutting back even more on water usage? An extra brick in the toilet tank isn’t going to do much good.

One of the best things you can do to lower your water bill without drastically changing your lifestyle is to make sure you’re not needlessly pouring water and money down your drains. Slow leaks, some of which are barely noticeable, are common in many households. Sometimes home owners notice a slow drip coming from a toilet, faucet or showerhead, but don’t think it’s worth calling a plumber to fix. They’ll get to it next time they have a “real” need to get a plumber to the house.

Think again. Slow drips are like pouring money down your drain a nickel at a time. A faucet that leaks at the rate of one drip per second can waste more than 2,000 gallons per year. That’s enough water to flush your toilet more than 1,300 times! If your toilet is running constantly, you could be wasting 200 gallons of water or more every day! Multiply your per-gallon water rate to find out how much it’s costing you to send all that water uselessly down the drain.

According to the EPA, leaks account for, on average, 10,000 gallons of water wasted in the home every year, which is enough to fill a backyard swimming pool. EPA studies also have found that 10% of homes have leaks that waste more than 90 gallons per day, which comes to almost 33,000 gallons a year!

Checking for unseen leaks is one of the services offered by our Dutton Plumbing’s technicians as part of annual inspections under our Family Service Plan agreements. Our technicians frequently find barely noticeable leaks in toilet flappers, faucets and shower heads. These problems are easily fixed and in most cases the money saved by fixing them will pay for our service call within a few months, maybe even weeks.

Even more serious are leaks in pressurized water pipes or sewer lines under a home’s concrete slab foundation. These pipes can deteriorate over time, especially if your home has copper piping in acidic soil.

Slab leaks can be hard to detect. Yet it’s important to find and fix them as soon as possible. Here are some potential symptoms:

If you’re tired of pouring all that hard-earned money down the drain, give us a call and ask about our Family Service Plan. Family Plan clients are assured a periodic inspection/maintenance visit from one of our plumbing pros, as well as money-saving discounts on all plumbing services.