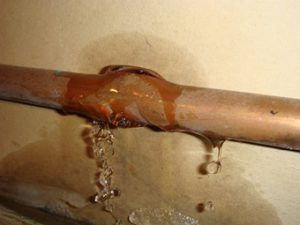 I didn’t know that until I read this report about a study from engineers at the University of Sheffield in England that found contaminants in the soil can enter underground water pipes and spread throughout a home’s potable water piping network.

Prior to their research nobody thought this was a hazard, because the water coming into a home is under pressure (usually between 30-45 psi). If you’ve ever had a faucet come loose you’d have seen this pressure in action with water gushing out in a rush. When a leak develops, that water pressure pushes outward on the interior of pipes, which should prevent contaminants from entering the pipe.

What the British engineers found out, however, is that a leak combined with a sudden change in water velocity can result in a pressure drop in that section of the pipe This allows water surrounding the pipe to be sucked back into the hole, along with any contaminants that might be present in the soil. The change in water pressure could result from things like valve or pump failures, or even firefighters using a large volume of water to fight a blaze nearby.

Contaminants in the soil could be anything from the seepage of oil or gasoline from surrounding tanks to pathogens from animal feces. This is not to say it happens very often, but the lead researcher on this study noted that many times people complain of sudden stomach aches that they might attribute to a bad meal when they could be coming from the water you drink.

I noted in this space last month that unseen leaks can be a costly waste of precious water, especially under our current drought conditions. That is reason enough to take steps to prevent them. This new finding adds urgency to the situation.