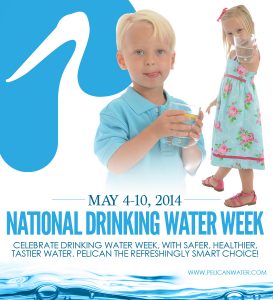 National Drinking Water Week, which this year falls from May 4-10, is an awareness campaign started years ago by the American Water Works Association (representing municipal water supply agencies). It has since been adopted by many organizations, including the EPA’s “Water Sense” program, to draw attention to our most precious natural resource.

Even though about 70% of the earth is covered with water, only about 1% comes from the lakes, streams, wells and other fresh water sources that are suitable for drinking. Even then most of it has to be treated to make it safe for consumption.

During the past century, many improvements in the health, prosperity, and longevity of the U.S. population can be attributed to improvements in water quality. Water treatment and disinfection have made U.S. tap water some of the safest and healthiest in the world.

Much of the rest of the world is not so lucky. According to the World Health Organization, about a quarter of the world’s population – more than 1.5 billion people — lacks safe drinking water. Millions of people die each year from water-borne diseases that have been virtually eradicated in the United States and other developed countries. Most of the victims are children under five.

In many parts of the world people must walk miles each day to communal wells, streams or rivers to collect jugs of often polluted water for daily household drinking, cooking and cleaning. Often this grinding task falls to young children. Imagine yourself as, say, an 8-year-old getting up at the crack of dawn, then trekking 5 miles or more, hauling several gallons of water on the return trip. All before attending school, which might require another walk of several miles. I can’t imagine staying awake long enough to learn the three R’s.

It’s so easy for us to simply turn on a faucet to access fresh water. We’d better not take it for granted, however. Our growing population coupled with drought conditions throughout much of the West – as we know all too well here in Southern California — make it more imperative than ever to conserve and cleanse our water supplies.

Municipal water supplies undergo elaborate testing and treatment involving dozens of procedures. If we could follow a drop of water from the time it enters an intake pipe until it exits the purification plant, we would find it an all-day journey of eight hours or close to it.

The biggest municipal systems serving cities such as Los Angeles require pipes measuring as much as 15 feet in diameter to handle volumes of water ranging upwards of a billion — billion — gallons a day. All of this fresh water typically comes from massive man-made reservoirs (in the case of Southern California and New York) or even more massive natural reservoirs such as the Great Lakes, from which Chicago and many other Midwestern cities draw their drinking water. Huge pumps lift thousands of gallons at a time dozens of feet to different treatment stations.

In normal years about 30% of California’s total annual water supply comes from groundwater, and up to 60% in drought years. Local communities’ usage will be different depending on which water district they are affiliated with. Suffice to say, our drought is putting a strain on all water resources and many communities have responded with mandatory or voluntary water reduction measures. These will become even more common as the drought continues.

Lack of water is nothing to celebrate, but our present drought may yet have a silver lining if it teaches all of us to be better stewards of our most precious natural resource. It has made me at least more aware and appreciative of National Drinking Water Week.