Most of us know that lead is a highly toxic substance. Medical research has conclusiv 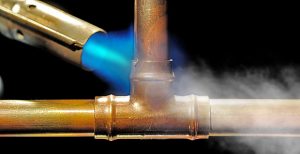 ely associated lead consumption with brain damage and various other health problems. We can recall the awful stories coming out of Flint, Michigan, a few years ago where residents suffered elevated levels of lead in their drinking water coming from lead service lines.

Because most Southern California communities got settled rather late in U.S. history, we are fortunate to be comparatively free of lead service lines. Most of our potable water gets conveyed from the treatment plant to our homes via underground pipe made of galvanized steel, copper or plastic, all of which are preferable to lead.

This raises the question of why lead was so commonly used in the first place. The simple truth is because until well into the 20th century when medical researchers identified lead’s health hazards, nobody knew any better. In fact, doctors of a century and more ago often prescribed lead compounds as treatment for diarrhea and other afflictions!

Because it is both malleable and leak-resistant, lead was the primary choice for plumbing pipes dating all the way back to the Roman Empire. In fact, the words plumbing and plumber are derived from the Latin word for lead, plumbum. Some historians even believe the decline of the Roman Empire and the demented behavior of so many of its emperors owe to widespread use of lead in its plumbing and drinking goblets. Until well into the 20th century, lead was the material of choice for water service lines in most major metropolitan areas in the U.S.

Now we know better. With the passage of time and better knowledge the plumbing industry has taken significant steps to reduce lead exposure in various plumbing products. Lead service lines began to be phased out about a century ago. Then in the 1980s, laws were passed banning solder with high lead content (as much as 50%) from use with plumbing products that convey potable water.

More recently, the Reduction of Lead in Drinking Water Act, which went into effect in 2014, has reduced the lead content allowed in water systems and plumbing products. The act changed the definition of “lead free” in Section 1417 of the Safe Drinking Water Act (SDWA) from not more than 8% lead content to not more than a weighted average of 0.25% lead with respect to the wetted surfaces of pipes, pipe fittings, plumbing fittings, and plumbing fixtures. Various brass alloys have largely replaced the lead in faucets and fittings. These materials include bismuth, silicon, selenium, and phosphorous, all of which provide different material properties, depending on the amount used and method of processing.

It wasn’t only the plumbing industry that relied so much on lead in the bad old days. Until those products were outlawed in the 1970s, most homes were decorated with lead-based paint and leaded gasoline ran our vehicles. Nowadays, we’re much more aware of the dangers of lead contamination.

People living in areas serviced by lead water mains are not automatically doomed to poor health. Water chemistry also affects lead levels, and water treatments are used to control corrosion that may cause lead to leach from leaded plumbing materials into the water. The absence of such treatment is what caused the Flint catastrophe.

While it would be ideal to replace all lead water mains in the U.S., the estimated cost ranges up to $80 billion. In many older cities water authorities do not even know how much lead pipe exists or where it is located. Blueprints used in their installation have disappeared or are gathering dust in ancient file cabinets.

We Californians have many environmental problems to worry about, but let’s be thankful at least that lead in our plumbing systems ranks way low on the list.